For any Princeton University student going through the course selection process, it is very likely that one thought in the back of their head is the distribution requirements they must fulfill during their four years at Princeton. The Undergraduate Announcement states: “While each student will concentrate in a discipline, a broad exposure to other kinds of knowledge will enhance students’ ability to discern what questions can be answered through methods native to their own fields and what questions require other methods.” Therefore, during the 2018–2019 and 2019–2020 academic years, students seeking an A.B. degree needed to take a certain number of courses that fell within each of seven distribution areas. While these distribution requirements may take on the shape of a checklist in the minds of students, they also offer a way to compare Princeton’s many academic departments and programs.

Focusing on the aforementioned academic years, many of the undergraduate courses offered at Princeton fulfilled one of the following distribution requirements and were thus labeled in the course offerings with the code in parentheses.

However, it is also worth noting that a not-insignificant portion of undergraduate courses fulfilled none of the distribution requirements and therefore were not labeled with one of the above codes. Generally, these courses fell into one of three categories: the mandatory writing seminars, language courses in which practical language instruction is the primary objective, and what could be called studio or practical courses that are focused on doing something (architecture studio design courses, project-based entrepreneurship courses, and private music lessons are some of the courses that would fall in this category).

Separate from the distribution requirement a course fulfills, every single course offered is listed with a course code of sorts that lists at least one academic department or program and the course number assigned by each academic unit, e.g., HUM 331. With this additional bit of information, the course offerings present a correspondence between distribution areas and the university’s many academic units. In turn, one could take this information and build a network to represent Princeton’s academics as a collection of academic units that are connected through the kinds of knowledge they pursue.

With all this preliminary information established as well as some analytical choices already described, it is worth elaborating on the research questions driving this small project before going any further. Encompassing any other questions, there is the desire to understand the intellectual network that is Princeton University. Often, professors have affiliations with more than one academic unit and will teach courses cross-listed beyond their home departments. Additionally, the notion of inter-disciplinary work is often strongly emphasized at Princeton. But how do those connections actually manifest within the university? One way is through the physical grouping of academic units through the Humanities Council, the High Meadows Environmental Institute, or the School of Engineering and Applied Sciences. Still, looking at something like distribution area could organize the university at a much more fundamental level, at the level of the knowledge being pursued. This, of course, then leads to the driving question of the networks below: how are the academic units at Princeton connected and organized by the distribution areas of the courses they offer?

Building the networks below required taking a data set that included the course offerings from the relevant semesters and reducing this data set to a straightforward edge list with distribution areas in one column and the first listed academic unit in the other column. As indicated above, this also required removing a sizable chunk of the overall course offerings due to their not fulfilling a distribution requirement, their being cancelled, and their being graduate level courses.

The edge list was then imported into Cytoscape where it was analyzed before being visualized as below with the “Edge Weighted Spring Embedded Layout” based on “edge betweenness.” Within Cytoscape, an additional “type” column was added to the Node Table in order to be able to color the distribution areas green and the academic units blue. 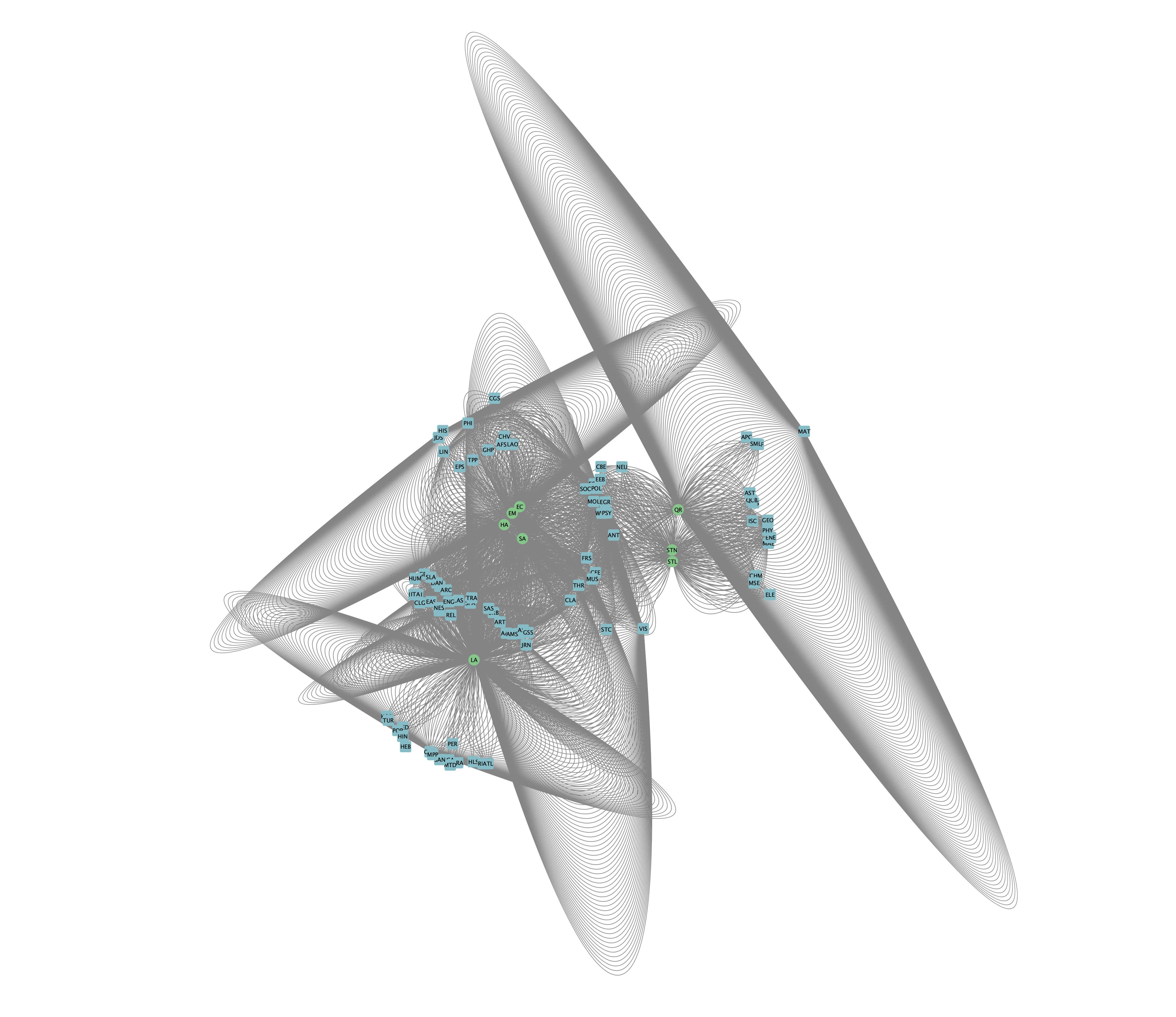 In order to increase the usefulness of this network visualization, the edges of the network were simplified by removing all duplicate edges in Cytoscape. However, in doing so, a column was also created in the Edge Table that preserved the number of duplicate edges that had originally existed. Thus, for example, the 219 edges between Mathematics and the QR distribution area were reduced to just one but with the value of 219 in a “NumberOfUnderlyingEdges” column. This then allowed for the width of the edges to vary depending on this new attribute.

The result is a much more useful network — a more easily readable network — that makes the network of academic units that much clearer. In part, this is due to the closer zoom level now that the 219 edges leading to Mathematics no longer visually overpowering the network. 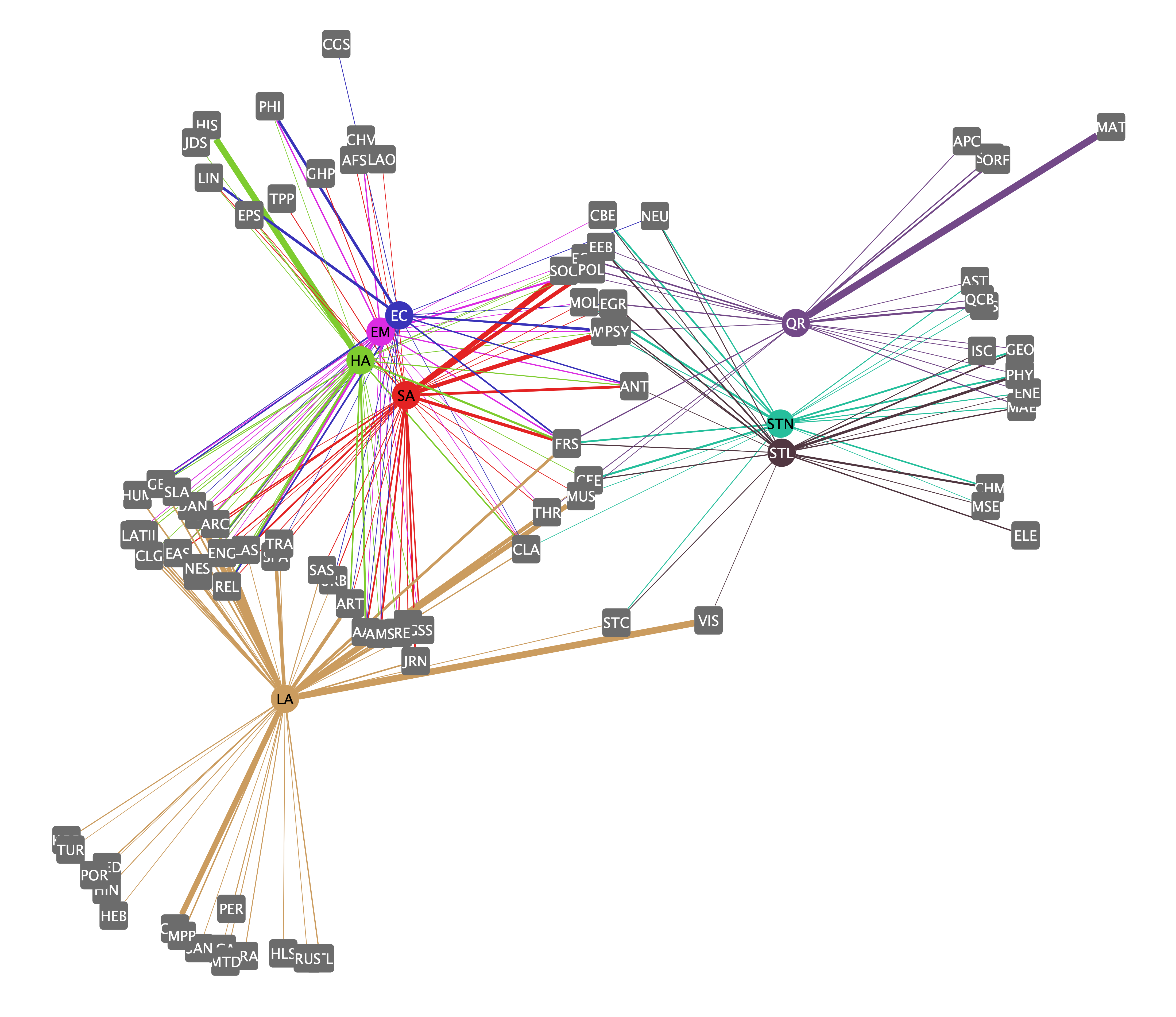 Still, the above network is not fully readable due to the close proximity of many of the nodes that cause many of the labels to overlap or be fully blocked. Thus, this final network visualization took the one above and separated the nodes by hand so that every detail of it would be more visible. Of course, this version of the network loses the actual shape of the network produced by the “Edge Weighted Spring Embedded Layout” of the network just above, but it reveals some key pieces of information.

For example, the networks above totally hides Environmental Studies under the Freshman Seminars. However, this hand-adjusted network allows for both to be seen, showing that they are the only two academic units listed first for at least one course in all of the distribution areas. It also declutters the dense groupings of academic units throughout the network and especially those in the group just above the LA distribution area. 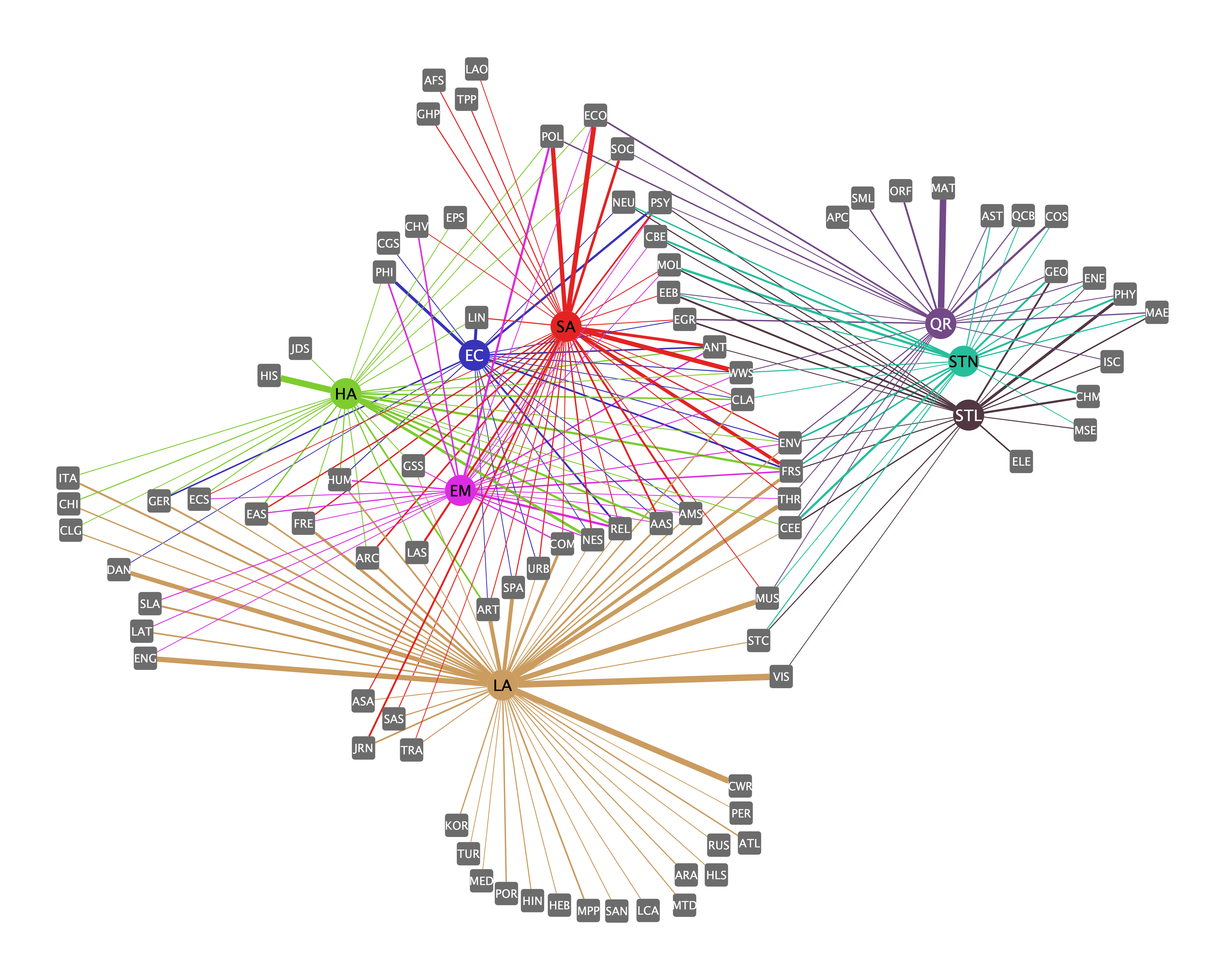 In building this network visualization with Cytoscape, the three distinct groupings of distribution areas were the most intriguing and informative features of the network. It shows that Princeton could be considered as being three separate though still linked academic endeavors: one focused on literature and the arts; one focused on the social sciences, ethics, epistemology; and one focused on STEM. It was also quite revealing to see how academic units were grouped with some solidly between distribution areas and others connected only to one distribution area. There were also some surprises like Visual Arts which one may expect to see only offer courses in the Literature and the Arts distribution area but in fact also offered at least one course in Science and Technology with a lab component.

Overall, these networks offer a different and fairly fascinating window into Princeton’s academics.

For ease of reading the networks above, here is a legend detailing the abbreviations for Princeton’s academic units during the relevant semesters. In the network, the distribution areas were labeled with the same codes as listed above.