Within this StoryMap Assignment I hoped to form a continuation of what I discussed in my first Digital Tools Assignment. As I began to narrow down my ideas, and the realization sunk in that tackling a multitude of love letters throughout history would be an impossible task to manage in a short period of time like one semester. Instead, I chose to stick to the idea of tracing someone’s life as it related to what was happening in history at that moment as well as how it influenced their interpersonal relationships. Still obsessed with the object of letters, both handwritten and typed, I stuck firm with the idea of tracing someone’s life through the words they wrote (and sometimes the words others wrote about them). Now, the only task left was to pluck a person out of history whose public life is well known but misconstrued at times. Somebody who can be found among the ranks of the greats, who seems untouchable and almost divinely-influenced by the work they produced in their field. While the names of greats throughout modern history floated around in my thought process, it took a simple trip outside of my dorm room to (quite literally) encounter the path of a great. Currently, I am residing in Walker Hall, home of a gorgeous arch that houses the Einstein Walk plaque that signifies the path that Albert Einstein would walk from his home to his office on Princeton’s campus. Maybe it was divine inspiration, or the quantum mechanics gods sending one last whiff of pre-midterms hope my way, nonetheless I had found a great in someone that has a direct influence on our University and in my personal academic studies; Albert Einstein. 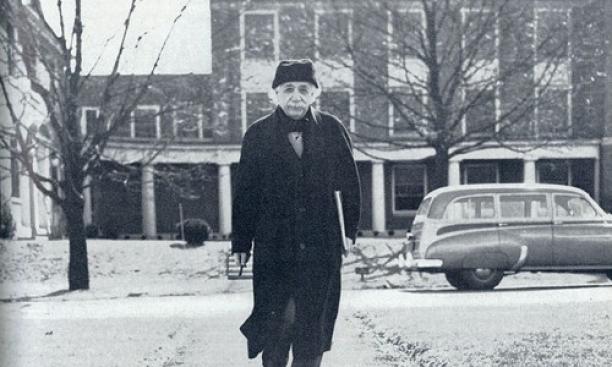 My choice of Einstein also went hand in hand with the access to the archival material I would have through the series of books released by Princeton University Press in 1987. Starting with The Collected Papers of Albert Einstein Volume 1: The Early Years, 1879-1902”]1 , I slowly but surely tackled German, French, and Hebrew translations with helpful footnotes that indicated the place of the paper in relation to Einstein’s life. I ended up using a miscellaneous collection of texts from Volumes 1-10 in this collection as they pertained to my research. While it became clear that this collection of books would be my primary source for this assignment, however I hoped to expand further out to see what other Universities or institutions had to offer in regard to any letters from or to Einstein. From here I found an additional text by Princeton University Press that housed the love letters between Einstein and his first wife Mileva Maric. As I neared the age of WWII, I also needed to pull from sources like the League of Nations archives and textbooks referencing the making of the atomic bomb. Nearing the end of Einstein’s life, I found myself reaching for more personal letters, and even came across a recent New York Times article regarding one of his final letters he wrote only a year before his death in 1955. Although my sources vary greatly, I feel as if the multitude of organizations and institutions that house these archived documents (or copies/translations of them) are a showcasing of Einstein’s direct impact on different levels of government, educational institutions, and even religious organizations. In regard to the dates and places that were essential to my narrative, I knew that I had to include Einstein’s birth town of Ulm, Germany as well as where he died in Princeton, New Jersey. But when I was choosing locations in between, I made sure to touch a broad basis and switch my StoryMap to image mode rather than cartography. By doing this I felt as if I was justified in placing certain letters in the location of the recipient such as the letters Einstein wrote to his sister Maja in Italy. In a sense, I thought of these placements as where his words were taking effect, as well as where his personal relationships held a strong footing across the world. This idea of a connection through traveling words was one I hoped my viewers would find.

Watching the historical narrative of Albert Einstein’s life unfold in both space and time allowed me to see a trail of life in papers that I had not been able to wrap my head around before. When we discussed in class the literary culture of societies such as Ancient Rome and even saw in the Cairo Geniza the significance of writing, I wanted to showcase the importance the words written by or for someone had on someone’s life. I believe I was able to capture this to the best of my ability using the StoryMap platform (and not overwhelming my viewers with an influx of information). When choosing supplemental texts or images, I tried my best to stick to a mixture of the document format given by Princeton University Press (typed in German from its original form), as well as some actual photocopies of postcards or other letters that showcased Einstein’s personal informal handwriting. I also chose to only include an image of him in the beginning of my StoryMap, hopefully allowing his persona to change with time and with the words that my viewers read. Creating an engaging visual narrative was definitely difficult because I wanted my viewers to engage most directly with the letters and texts themselves, rather than with vibrant images. Sticking to a black and white theme, I hoped that Einstein’s life could be brought to color by a viewer relating themselves to something they see in some of the more personal letters I chose. With this in mind, my brief captions on the chosen images and texts do not go into detail but rather set the stage for the viewer to see themselves or interpret for themselves.